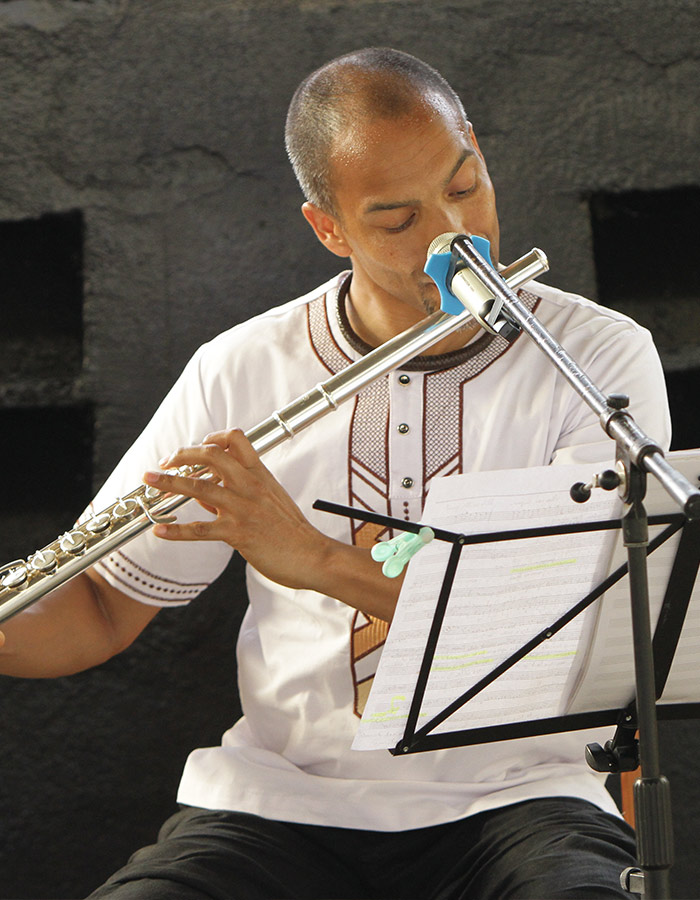 After practicing African percussion and drums, Idriss Damien studied the transverse flute at the Centre de Formation des Professionnels de la Musique in Lyon, at the Ecole Nationale de Musique in Villeurbanne and then at the Nice Conservatory. He studied classical music, jazz and oriental percussions.

As a permanent artist at the Friche RVI in Lyon, he’s able to mix his art of improvisation with multidisciplinary practices, leading him to collaborate with theatre, contemporary dance, soundpainting, poetry, shadow theatre, flamenco, hip hop, electroacoustic music and contemporary jazz.

Passionate about history and spirituality, in 2010 he created an association dedicated to ancient and sacred music. He recorded 3 albums – Souffles, Sacrés and Luminarium (Breaths, Sacred and Luminarium) – which explore ancient and sacred music from the Mediterranean basin from the 4th to the 12th century, and contemplative music from Africa, India and Asia Minor. In 2018 he also recorded an album dedicated to free improvisation on the Lérins Islands, in France.

Idriss Damien has collaborated with artists of all kinds, with whom he has performed in Europe, West Africa, Israel, Palestine, Turkey, Greece and the United States. In particular, he has shared the stage with Jean Paul Lécot, Michel Doneda, Barre Philips, Jacques Bonnafé, Paco Séry, Michel Godard, Fati Mariko, Hovnatan Avidékian….

His sound research on primitive flutes and other ancient instruments has allowed him to approach a different aesthetics, as well as rare sound production techniques, offering a wide repertoire ranging from the mouthbow and kazoos, to contemporary music and classical music by Johann Sebastian Bach.